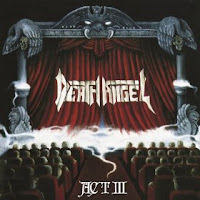 I had this CD a few years back but I got rid of it for some reason. I cannot recall what that reason was. It obviously wasn't a good one seeing as I bought it back again. Anyway, Death Angel was (and still is) thrash metal. They weren't a part of the "Big Four" but I suppose they were a part of the B-team of thrash with the likes of Testament and Exodus. Act III sees the band getting a little progressive with a lot of variety on this album. There are a couple of melodic acoustic tracks and some funk influence as well. I could see where Precious Death might have been influenced by this record, especially on a track like "Discontinued." There's also a lot of early Anthrax in here too. It's a pretty good album. I still don't know why I got rid of it. Must have been a bout of temporary insanity.

Useless Fact: This band eventually renamed themselves The Organization. Eventually they went back to Death Angel. Or something. I'm not really well versed in Death Angel lore. And yes, I'm too lazy to look it up.
Posted by The Old Man at 9:41 AM