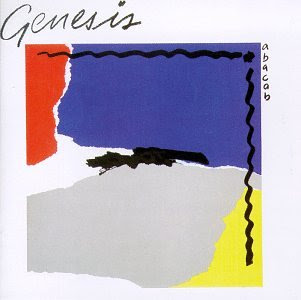 That is some seriously Eighties cover art right there.

Though I think that’s pretty fitting. Abacab is a product of its time, steeped in eighties pop and new wave. It’s a few more steps away from progressive rock but seeing as how the previous album was Duke it makes perfect sense. Of course, the band could never truly excise its progressive rock past even when they created the sell-out laden We Can’t Dance. We can find plenty of progressive goodness here in the title track which is another fine example of the band melding both prog and pop. Then there’s “Dodo/Lurker” which is a fascinating and strange track with Collins, once again, absolutely killing it on drums. I think this song is probably one of my top favorite Genesis tracks of the year.

We also have some pretty darn good pop here too. “No Reply At All” is a catchy track with a little bit of Motown influence to it. There’s also “Like It or Not” which could best be described as “Misunderstanding II.” Speaking of influences, a lot of New Wave crops up in Abacab as I’ve mentioned. First in the title track, then in “Keep It Dark” and “Who Dunnit?” – the latter of which is one of the most annoying songs I have ever heard. While maybe not the worst Genesis song it’s definitely up there. “Man on the Corner” is the first example of that unique “popping” drum machine sound that would later become a staple of both Genesis and Phil Collins’ solo material. It’s also the first of the “trying to be heart-wrenching but failing” songs that would infest Genesis and Collins’ later output.

As I’ve been listening to this album I’ve kind of been dreading writing the review. I just don’t have that much to say about Abacab. It’s a fine, fun album and I enjoyed listening to it, even “Man on the Corner” (not so much “Who Dunnit?”). It’s a natural evolution from Duke though it doesn’t quite have the weight of that album. It was successful in its day – going platinum in the U.S. alone. However, it’s not exactly the album I’d hand someone to expose them to the wonderfulness of Genesis. Aaaand… that’s really all I have to say. I promise the next one will be longer. It’s on Nursery Cryme for heaven’s sake!

Useless Fact: There are actually four different color variants for the cover. Also, the title “Abacab” comes from the band labeling each section of that song and that’s the order those sections come in.
Posted by The Old Man at 10:13 AM