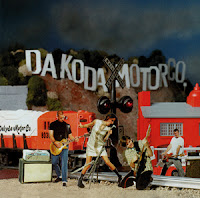 There's not a lot of information about Railroad out there. Heck, I didn't even bother to buy it when it first came out. I have no idea why, though. I knew that Davia left the band and Melissa Brewer brought in. For whatever reason I'd just decided I was done with Dakoda Motor Co. It could also be that most of what I'd heard about this album was, "Eh...it's alright." I got this to complete my DMC collection because I sort of consider myself an archivist of all this Christian music. I also wanted to really dig into it and see if it was any good. Eh...it's alright. Melissa is a suitable replacement for Davia but she's not given much to do. Peter sings more on this album than he had on the previous and he's not singing well. He's sort of doing this screachy shouty voice - not like the smoother vocals he used to do. It's a shame because Peter and Melissa sound really good together. It's like, dude, you hired this woman to sing - let her sing! Also, the music itself is really missing something. This was the band's big label debut for Atlantic records. I feel like this is really watered down. The previous albums had that fun surf-pop vibe with really catchy, unique songs whereas Railroad sounds like milquetoast mid-nineties alternative rock. None of the songs really stick out. I'm not sure if this was the label's fault or the band's, but it's definitely missing that spark that made the first two albums so fun to listen to. Well...at least I can say I have a copy for the vault.

Useless Fact: Peter King hosted some show on MTV in the summer. It was about beach sports or something? I can't remember. He was on a beach - I do remember that.
Posted by The Old Man at 9:26 AM