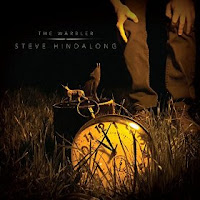 The Warbler is Steve Hindalong's second solo album. It was a Kickstarter album, but I didn't kickstart it because I didn't have the funds at the time. However, I was more than happy to purchase it the regular way. I liked Skinny okay and I absolutely loved "Love You Bad" when he released that. I have to tell you, this is a great album. Probably better than some of the latest Choir records, to be honest. Steve has never been a strong singer and that's still true here. However, he makes up for it with strong, poignant songs, good instrumentation, and great production. The past few Choir records have struggled with lyrics. They've been okay, some have been great, but some have just felt kind of uninspired. He's caught a second wind here, though. These are the kind of lyrics that we expect from him. This album is definitely a contender for one of my picks of the year!

Useless Fact: If you're reading this you probably already know that "The Warbler" and "The Antithesis of Blue" are both Choir songs re-arranged. They kind of serve as bonus tracks for the album.
Posted by The Old Man at 3:40 PM