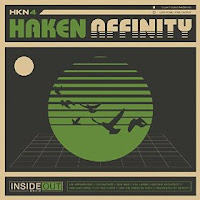 I fell in love with Haken after 2013's The Mountain. They remain one of my favorite progressive rock/metal fans so I was eager with anticipation for Affinity. It's a different album, influenced and inspired by progressive rock from the 1980's. So there's lots of 80's type riffs and 80's type synth parts. It all gels together so well and sounds new and vibrant and nostalgic at the same time. Like...this could be the soundtrack to the book Ready Player One. I'm not sure whether it overtakes The Mountain or not, but it's a great album. I think the parts where they're the 80's-est are my favorites. "Earthrise" in particular is an amazing song as is the fifteen minute epic "The Architect." The album isn't a concept album, per se, but has the overall theme of artificial intelligence and how it affects humanity. At least I think that's the concept. Anyway... go buy this!

Useless Fact: All the packaging for the album resembles cassette packing and old computer displays.