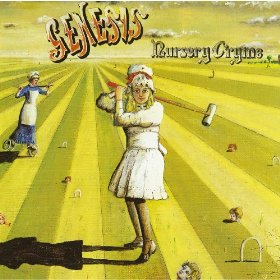 1. The Musical Box
2. For Absent Friends
3. The Return of the Giant Hogweed
4. Seven Stones
5. Harold the Barrel
6. Harlequin
7. The Fountain of Salmacis


Way back in the day I worked at a hospital cancer center. I made molds and helped inpatients. I had my own little room and my own little space. I had the benefit of following a complete numbskull so all I had to do was show up and do my job. Everyone thought I was like Superman or something. It was nice. That was one of the best jobs I ever had. What’s the point of all that you ask? Well, hang on and I’ll tell you. You’re awful impatient aren’t you? Just relax. Anyway, the point was next to my little “office” was the dosimetrist’s office. I had no idea what a dosimetrist was or what he did (still don’t), but he was a pretty cool guy. We were both music lovers and we’d occasionally trade music back and forth. One day he gave me Nursery Cryme and I listened to the whole thing in one sitting…because I had a job that allowed me to do that. Did I mention that was my favorite job? That was totally my favorite job.

I would love to say that listening to Nursery Cryme that day was a revelation. That it really moved me on a deep, fundamental level. That I had gained a new appreciation for the craft of music. Ha ha! No.  It wasn’t. I just remember thinking it was really, really weird and not my type of music at all. I was not a progressive rock fan back then. My little mind just could not wrap itself around what was going on. This guy also gave me one of King’s Crimson’s albums and I was similarly unimpressed. You’ll have to forgive my ignorance. I was dumb. My eyes were closed to the wonder.

My experience with Nursery Cryme was much different this time. I’m a bonna-fide progressive rock fan now. I’m used to ten-minute songs and weirdness. I like ten minute songs and weirdness (to an extent). I’ve also been marinating in Genesis all year so I came fully prepared for what I might find. This being a Peter Gabriel era album, I braced myself for that emotional disconnect I had experienced with Foxtrot. I mean, just look at the song titles – “Return of the Giant Hogweed,” “Harold the Barrel,” “The Fountain of Salmacis.” I could just picture Peter Gabriel’s painted visage hovering next to me screaming, “IDEAS! CONCEPTS! PAY ATTENTION YOUNG MAN!”

Young man? Who does he think he’s talking to?

I don’t know whether I’m just used to Genesis by now or what, but I really enjoyed my time with Nursery Cryme. I was more engaged than I was with Foxtrot. The emotional disconnect remained, but it wasn’t as bad. I loved the little guitar parts in “The Musical Box” that compliment Gabriel’s vocals. Eventually the track builds into a maelstrom of progressive bombast. That’s a good thing, by the way, at least for me. Also, “For Absent Friends” (the very first Genesis song to feature Phil Collins on vocals) and “Seven Stones” had a bit more heart that I was expecting. I especially enjoyed the jaunty “Harold the Barrel” – speaking of weirdness – a song about a restaurant owner who cut off his toes and served them for tea. The man then escapes and tries to commit suicide, while the authorities (and his mother) try to stop him in the most inept and hilariously British way possible. The only track I didn’t care for was “Return of the Giant Hogweed” mostly because it didn’t really seem to stand out for me.

One thing I noticed about this album that seems to be unique is the copious use of fuzz distortion on the guitars. I know they’ve done that on other albums but there seems to be a lot more here than on any album I’ve listened to yet. Some parts sound just shy of heavy metal because of it – giving off sort of a Black Sabbath vibe.

According to what I’ve read, Nursery Cryme wasn’t as well received and reviewed as the albums that came after. Even now it seems to occupy the “good, but not great” spot on the spectrum. I’d have to agree with that assessment. I enjoyed it, but there was no danger of it overtaking Selling England or Trick of the Tail as my favorite Genesis platter. I can see myself taking it out for a spin every now and then but it’s not something that’s going to stay in heavy rotation. Mostly I just want to revisit Foxtrot and see if my opinion might change. Unfortunately, I must tread ever onward…

Useless Fact: Apparently, “Harold the Barrel” was replaced in live shows by “Get ‘Em Out By Friday” and wasn’t really played after that.