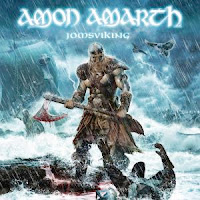 I wasn't originally going to get Jomsviking as I'm not a huge Amon Amarth fan. I liked Deceiver of the Gods alright and that was kind of enough for me. However, as often happens, I was on vacation and I was seduced by the power of the special edition media book packaging and cool cover art. I like this album, it's got pretty much everything I liked about the last one...only again. Basically, if you're not a fan of Amon Amarth, then you can safely skip Jomsviking. If you are a fan you probably already own this so my words mean nothing to you. This album is the band's first concept album. It's about a young viking warrior searching for his lost love. Spoiler alert: it doesn't end well.

Useless Fact: Doro Pesch provides some guest vocals on "A Dream That Cannot Be" as the lost love. As you can tell by the title, their love is not exactly The Notebook.