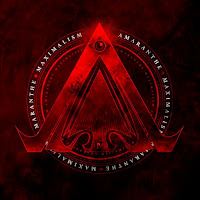 I tell you the truth, Maximalism is basically like a Monster energy drink in musical form. Life got you down? Need motivation for work or school? Pump this album - you will be motivated. It goes from zero to RAWK! in sixty seconds. Amaranthe is one of those bands, like Paramore has been over the years, whose albums have gotten better and better with each release. Maximalism is no exception. The band has spent years refining and carefully welding metal, techno, and pop into a radio-friendly blend. This is definitely the band at their most pop, especially with songs like "That Song" (the first single), and the Dead or Alive homage song "Boomerang." Yet it's not watered down - it's got enough substance that a few tracks could actually stand to be a bit longer. Which I think I said about the last album either. I can say that this is probably my favorite album from this band so far. I still hate the title though. Why couldn't they just call it "Maximize?" Maximalism is NOT a word! Speaking of which, the lyrics on this album are...not deep. It's mostly about high energy, partying, and just generally being extreme. Not much emotional turmoil here, no sir. Fortunately, the album doesn't need it as they make up for any lack of depth with sheer energy and passion. Elize Ryd is really coming into her own as a powerhouse vocalist. I can't wait to see what the future brings for these guys - hopefully some mainstream success.

Useless Fact: "Fury" is the first song the band has done to focus on the growler of the band. It works really well, actually.
Posted by The Old Man at 9:04 PM