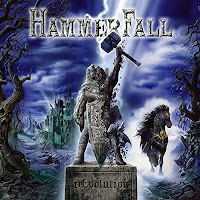 Many years ago I used to have HammerFall's Chapter V: Unbent, Unbowed, Unbroken and I liked it quite a bit. I got rid of it for reasons which now escape me and were probably foolish and dumb because it was a great album. So recently I got a hankerin' for some of HammerFall's straight-forward, no nonsense, classic heavy metal. I was hoping that FYE might have some and was hoping I could get it while on vacation. As luck would have it, they did have this album so I snatched it up. It's HammerFall - for good or ill. They are one of those bands that know their style and stick with it. I absolutely love it. That being said, I don't think that if you didn't like the band before this album isn't gonna change your mind. It definitely scratches an itch for me, though!

Useless Fact: I think this is the first time the band's mascot, Hector, has his own song.
Posted by The Old Man at 8:17 AM