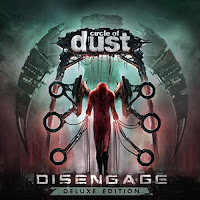 Disengage is the final album in Klayton's Circle of Dust remasters. Naturally, being a Klayton production, there's a metric butt-ton of bonus material and superb art direction. I didn't have much experience with this album because I never even knew it existed until years after its release. It's much different than the albums that came before it. Most notably, the lyrics are not really Christian as Klayton was distancing himself from the market. It's also more on the techno side and less on the metal side. I think it would be a stretch to call this industrial. There's also not very many cool, strange samples. Disengage is also very ambient. Several tracks are techno-ambient tracks, that while cool, don't really do much for me. Almost the entire latter half of the album is remixes of "Refractor" and "Chasm." Hope you like the choruses to those two songs! Also the line, "YOU ARE FRAGILE!!!" You will hear these a lot is what I'm saying. This is probably my least favorite of the Dust albums but only because of the abundance of remixes and ambient stuff. I really like the first five or six tracks and I like some of the bonus stuff on disc two as well. There's just a lot of other stuff that isn't really for me.

Useless Fact: "Yurasuka" is not Japanese. It means "You're a sucker." Not much of a fact, but I only realized it when I heard the song itself. I thought it was Japanese for the longest time! Also, "Thulcandra" and "Perelandra" are names from C.S. Lewis' "Space Trilogy."
Posted by The Old Man at 6:51 PM