The Genesis Project - "Calling All Stations" 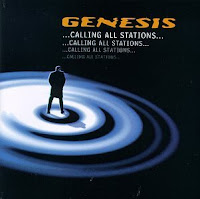 
Poor, poor Calling All Stations. Talk about an underrated album! What’s lower than underrated? I mean, a majority of people don’t even know this album exists. The band never mentions it – almost like it never happened. It did happen, however, and it never really had a chance. It came out in ’97. If you’ll remember, alternative rock had ruled the rock scene for years. Pop princesses and boy bands ruled the radio. There was some ska for a minute, there. Point is, while the bands unique blend of progressive rock and tight, catchy pop worked for them in ’91 when We Can’t Dance was released, it definitely wouldn’t in ’97. This is especially true considering, at this point, the band only contained two original members. That’s right...Phil Collins had flown the coop. He’d become the “face of the band,” but dang it, he had Disney movies to score. So not only do we have a style that the radio at the time wouldn’t touch, we’ve also got a form of Genesis that lacks Peter Gabriel or Phil Collins. So it’s safe to say that Calling All Stations was pretty much doomed to fail before it was even released.

I remember my initial reaction to an album without Phil Collins was pretty much, “Yeah… no thanks.” However, I was young and ignorant of the band. Tony Banks himself wrote a fair amount of Genesis’ catalog by himself. He wrote so much that Steve Hackett got mad about it and left. Not to say that Collins didn’t contribute to the writing and sound of the band because he did, but I think that Mike Rutherford and Tony Banks contain enough Genesis DNA to be given a chance. It’s the reason why I eventually chose this album over …And Then There Were Three.

So the main question becomes, “is it any good?”

Yeah, actually. It’s pretty dang good. Ray Wilson was hired to handle vocal duties and while he doesn’t sound like either Peter or Phil, he does a great job on his own. The album busts out of the gate with the title track which is pretty heavy. Probably the heaviest the band ever got. It leads into “Congo” which recalls albums like Invisible Touch and is one of the tracks where Collins’ absence is most felt. “Shipwrecked” is another tune I really dig and I think it actually benefits from not having Phil. I think it would be a lot sappier with him in it. In fact, while there are some love songs there’s nothing lame, over sugary, or just plain lazy. “Alien Afternoon” is a great throwback to the more progressive Genesis as is “Small Talk.”

The big drums make a return here too to give it the illusion that Collins is behind the kit. You’d think that would come off poorly, but it doesn’t. You just go, “Oh, they’re trying to remind me that this is a Genesis album.” The only thing that really hurts this album is the fade-outs. Several songs just sort of… fade away into silence. It’s like they didn’t know how to end them so they just turned down the volume. It’s not a deal breaker or anything but I’m surprised that so many songs would end this way.

That said, Calling All Stations is a really good album. It does suffer a bit from the lack of Collins and the fade outs, but the songs are strong and Ray Wilson is a fantastic vocalist. I honestly think it is worthy of the Genesis name and wish the band would stop forgetting about it. It is absolutely worth your time and attention and I’m glad I ended up choosing it for the project.

Useless Fact: Rumor has it Ray Wilson wasn't treated very well by the rest of the band.
Posted by The Old Man at 7:20 PM