Circle of Dust - "Machines of Our Disgrace" 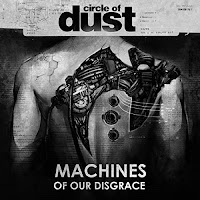 Circle of Dust - Machines of Our Disgrace
2016, Fixt

Klayton caps of a year of Circle of Dust remasters with a brand new album. A fantastic one at that! Machines manages to combine the sounds of the old albums into a unified whole. You've got some Brainchild type moments with the title track and "Contagion," but you've also got some more Disengage moments with "Embracing Entropy" and - naturally - "Malacandra." I'm really impressed with this album and I hope this isn't the last we hear from Circle of Dust. The only reason why Scandroid beat out this album for a spot on my picks is because Scandroid had the benefit of being a delightful surprise. I kind of knew I was probably going to dig this.

One thing I noticed was the voice samples. Past Circle discs were full of random samples from television shows, movies, etc. I've noticed that the samples on this album have kind of been limited to obscure sci-fi movies. That's not a complaint by the way. I'm wondering if Klayton was a little gun-shy about using copyrighted material. Back in the day you could get away with that sort of thing, but today? Good grief... he probably had to pick some stuff that was not under copyright just to save himself some headache down the line.

Useless Fact: "Neurachem" features samples from the seminal classic, The Brain That Wouldn't Die as made popular by the best show on earth, Mystery Science Theater 3000.
Posted by The Old Man at 8:17 AM