The Genesis Project - "The Lamb Lies Down On Broadway" 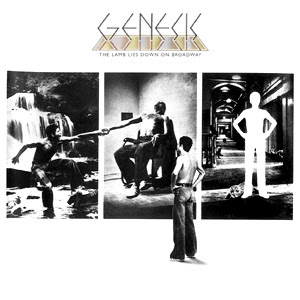 DISC TWO:
1. Lilywhite Lilith
2. The Waiting Room
3. Anyway
4. Here Comes the Supernatural Anaesthetist
5. The Lamia
6. Silent Sorrow in Empty Boats
7. The Colony of Slippermen
8. Ravine
9. The Light Dies Down On Broadway
10. Riding the Scree
11. In the Rapids
12. it.

We’ve finally reached the end of our tour. It’s fitting that we end on this particular album as I think it’s the band’s biggest, most ambitious release. There was so much weight on this album that it nearly broke the band. From what I’ve read about the making of Lamb, everyone was miserable. Peter Gabriel, whose surreal and trippy story drives the music forward, quit while it was being written and recorded (he returned to finish when a deal fell through). Other members were going through divorces and what not. It was a tumultuous time for Genesis. If you’ll remember I remarked at length about the relaxed vibe of A Trick of the Tail. No wonder! This album takes itself pretty seriously. Peter Gabriel is at his most obtuse and pretentious. He had to have left after this album because I don’t know what he would have done with himself he continued on. This is truly the apex of the “aggressively intellectual” (to borrow a phrase from Jeremy Parrish), incarnation of the band.

Speaking of pretentious and obtuse, let’s recap the story shall we? After several listens and some research I think I finally have a grasp on what was going on. Keep in mind this is the actual story. I am not making any of this up…
Rael is a Puerto-Rican street kid living in New York City. One day he sees a lamb lie down on Broadway. Literally. Kind of surprising to start it out like that, but there it is. Rael notices a dark cloud over the city that turns into a giant movie screen looking thing and absorbs him. He wakes up in a cave, encased in a strange sort of cocoon. Then he finds himself in a cage…somehow. He sees his brother John whom he begs for help. John refuses and leaves him. John gets out of the cage somehow and finds himself in some sort of factory – a factory which makes people. He experiences several flashbacks from his life which end with a vision of him having his “hairless heart” cut out. He then comes to a giant spiral stair case which people are crawling up.

At the top is a room with thirty-two doors, one of which will lead back out. Rael meets a woman who helps him find the right door and he leaves the chamber. Then he meets Death. Death doesn’t kill him, mind you, he just says “hi” I guess? Rael then finds himself in a cave with three snake-like creatures called Lamia. He has sex with them (because why not, I mean really, when are you ever going to have the chance to have sex with snake women?). They bite him and when they taste his blood, it kills them. He then decides (and remember I am still not making this up) to eat their dead bodies because I guess he forgot to pack a sack lunch on this little psychedelic road-trip.

He leaves the cave to find a colony of “Slippermen.” Slippermen are deformed humans covered in tumorous lumps. Rael finds that he has turned into a Slipperman, as have all who’ve shagged and eaten the Lamias. I guess it was quite the fad for a bit there. He finds his brother, John (now also a slipperman, because of course he is). They find out the only way to turn back to normal is to visit Doktor Dyper and…wait for it…be castrated. They agree to this far more quickly than you’d think.

So… (yeah, we’re not done)… they get castrated and they turn back to normal. As a consolation prize they get to keep their junk in golden tubes around their necks. As they’re traveling a raven swoops down and snatches Rael’s Testicle Tube (a great name for a band, by the by). The Raven drops it down a waterfall into a crevasse. Rael is as distraught as you imagine a man would be and begs John to help him get his balls back. John refuses. Rael chases after his babymakers and falls down into a ravine. John appears to rescue him but gets caught in the rapids. Rael goes to rescue him and pulls him onto the shore where we find out the big twist to the whole story…surprise! John is Rael! Rael is John! They’re the same person! Then they dissolve into light. The end.

Um…so, gentle reader, did that story do anything for you? Did you get the concepts? Yeah, me neither. Now I might not be telling it right, but it doesn’t matter – my opinion stands. I’m not really sure what we’re supposed to take away from this. There’s sort of an Alice In Wonderland vibe here – a connection made obvious by the Mad Hatter printed on the CDs themselves. There’s no whimsy though. It’s far too dark and sexual to just be a flight of fancy. In the end it’s like one of those dreams that feel like more than a simple dream but whose meaning remains inscrutable. If I were to guess there’s probably some point to be made about how one defines masculinity and the trouble sex can cause when carelessly pursued. Still, in the end you’re left asking yourself, what the heck did I just listen to?

And that’s really the trouble with The Lamb Lies Down on Broadway. The story completely dominates the album. Despite the fact that the music was a band effort with Gabriel contributing the lyrics and story, it seems like this is a Peter Gabriel solo album. The music is good and I liked it more each time I listened to it. But there’s that disconnect… that pesky emotional disconnect that I’ve been talking about since I started this project. It’s just really hard to connect with the material sometimes because it’s so strange. There seems to be very little one can hang their emotional hat on and little in the way of relatable feelings. Even with Pink Floyd’s psychedelic concept opus, The Wall, there were themes of isolation, loneliness, and alienation that everyone could relate to. Here? Not so much.

I know it sounds like I didn’t like the album, but that’s not true. I really did like it. It stands in stark contrast to the rest of the band’s catalog as something wholly unique. I absolutely recommend it – just be aware of what you’re getting into. Besides, Mike Rutherford’s fat bass line in the title track and Steven Hackett’s beautiful guitar passages are just too good to let a little thing like Lamia sex keep you from hearing them. Give me some time and this could even rank up with Selling England and A Trick of the Tail as one of my favorite Genesis platters.

Useless Fact: Peter Gabriel regretted his Slipperman costume because it was so bulky he had a hard time moving around and singing while wearing it.
Posted by The Old Man at 8:25 PM