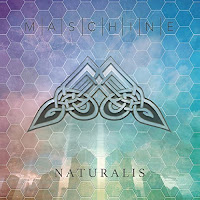 Maschine - Naturalis
2016, Inside Out

You might remember way back in 2013, I gave Maschine's debut, Rubidium a spot on my top picks of the year. I didn't even know the band was putting out a new album until a few weeks before it was released. I am so on top of things these days! Anyway, Naturalis is pretty much a fine continuation of what the band started with their debut. It's funny, two of the complaints I had with the first album were kind of addressed on this one. The vocalist doesn't seem like he's trying to sound all gravelly or tough, he just sings. Also, the lyrics have changed from relationships to natural disasters and war stories. Definitely more epic than before. If you want more music like the first album but with a little more polish, then this album does the trick.

Useless Fact: "Megacyma" is about the Japanese tsunami from a few years ago.
Posted by The Old Man at 7:02 PM