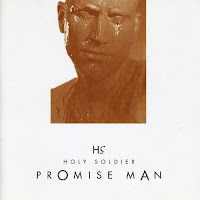 Time and fate kind of conspired to make sure Promise Man wasn't enjoyed quite to the extent that it should have been. It came out smack dab in the middle of the Nineties when the alternative revolution was in full swing. Former vocalist Stephen Patrick, the charismatic - if somewhat eccentric acting (at least on stage) was replaced with Eric Wayne. He's got a lower register than Patrick but fits the band's new style. Speaking of which, it's not the commercial hard rock/metal they started out with. As befitting the times it's more alternative hard rock. While long time fans might disavow this album as a sell-out, I really enjoy it. No, it doesn't sound like old Holy Soldier. It sounds more like...King's X. Not lying. There's some pretty serious King's X worship going on here, especially in tracks like "Break It Down" and "Cover Me." They've definitely got the whole drop-d thing mastered. There's also a cover of Larry Norman's "Why Don't You Look Into Jesus?" that was on a tribute album many years back. The band was signed to Forefront, which if you'll remember was the home of hip-hoppers like DC Talk and E.T.W. I guess Forefront wanted to branch out? Anyway, far away from the time it was released I can say it's a good little album. I like it just as much as Last Train.

Oh, and since we haven't done my weird associations game here we go. I got this for Christmas in '95 along with the Super Nintendo masterpiece, Chrono Trigger. So those two things have been linked my entire life.

Useless Fact: Well...I guess more people enjoyed the album than I thought. It won a Dove Award for best hard rock song, "Promise Man."
Posted by The Old Man at 8:53 AM