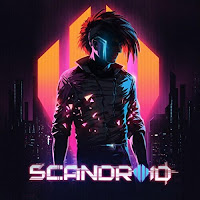 I was not initially interested in Klayton's Scandroid project because I'm not a huge techno person. I like industrial and I like the fusion of styles that Klayton is known for, but straight up techno? No thanks. Then I heard what Scandroid actually was - a love letter to Eighties synth wave. I listened to "Neo Tokyo" and I was hooked. It's like it scratched and itch I didn't even know I had. Yes, I know, I always have the nostalgia itch - no need to send letters. It's scary how authentic it sounds. However, even though it revels in Eighties synths, percussions, etc. it sounds fresh, new, and full of energy. Imagine the soundtrack to the first Mass Effect or the more recent Stranger Things combined with tight hooks and pop sensibility. That's kind of what you're in for with Scandroid. There's even a cool cover of Tears for Fears' "Shout." I dug this o much I put it on my best of 2016 list without reviewing it first.

Useless Fact: "Probots and Robophobes" says it "features" Circle of Dust. How does that work? Both of them are Klayton. So... Klayton featuring Klayton?
Posted by The Old Man at 3:31 PM