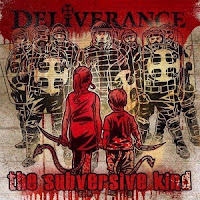 No one should be whining about how the new Deliverance isn't heavy enough. 'Cause, dang. I don't think it's a stretch to say that this is probably the band's heaviest album - and I include Greetings of Death and What a Joke in that statement. Jimmy has assembled a crack team of thrash specialists from the old guard. Jim Chaffin and Greg Minier (formerly of the Crucified) are manning the drums and lead guitar, respectively. Victor Macias (ex-Tourniquet) is on bass. Greg Rogers has even been enlisted for live shows and such. Did I mention this is heavy? Those who've been pining for the old thrash/speed metal days should be overjoyed. The songs are fast and furious and Jimmy's vocals are the harshest they've ever been. The focus here seems to be a little less on intricate thrash riffs in favor of sheer power and passion a la Sepultura. Not to say that there aren't cool riffs here because there definitely are it's just that you won't hear a more technical riff like, for example, "Solitude" or "Flesh and Blood." Again, that's not necessarily a bad thing. Take "Center of it All" - a blazing thrash tune that won me over with its sheer ferocity. "The Black Hand" has a cool little intro before blasting off at a breakneck pace. The title track echoes "Weapons of our Warfare" a bit in the beginning while being one of the more "melodic" tracks on the album. I put "melodic" in quotes because, as I've said, speed and power are the name of the game here. Songs are very focused here. They have a job to do (namely, kick your head in) and they bust in, do that, and get out. So there's no acoustic interludes or extended classical guitar passages. Also... I think there's a little bit of punk attitude in here too, just a touch, to make things interesting. One of the things that I really like about this album is that even though it's a brief eight tracks long (about a half hour running time), there's still a lot of meat here. I've listened to it several times and I still don't feel like I've got all it has to give. That's quite impressive considering the length. As one of the backers I am quite pleased with the finished product and I can't imagine anyone who was a fan of the band's earlier material wouldn't be pleased as well.

So it seems like Jimmy just can't release anything without some controversy. People complained about the cover. I'm not sure why... I guess it made them feel weird feelings and they just couldn't handle that. Then people where complaining because they thought the album was already out. As of this writing it is not. The only reason why I have it (just the mp3s too, not the physical CD) is because I was a backer. It seems like when it comes to Deliverance people just lose their minds or something.

Useless Fact: There were originally supposed to be ten tracks on the album (one was a cover), they decided to leave the cover off. Then it went down to eight. Not lying... I'd still like to hear those other two songs.