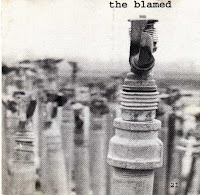 This album is one of those treasures from the early days of Tooth & Nail... before they got all corporate and everything. The Blamed are raw and gritty punk rock with little polish. The production is similarly rough but in this case it actually helps the music. There's a definite Crucified vibe here but that's probably because Jim Chaffin is the drummer. I'm not sure it quite reaches the heights of some of the Crashdog albums in terms of genuine punk - but it's a good, fun album with some good hooks. "The Ballad of the Blamed" is an interesting song in that it's this melodic, acoustic number that really shows that the band has some genuine chops when it comes to their instruments. They released a second album called Frail but for some reason I never liked it.

Useless Fact: The Blamed contributed a song to the Sweet Family Music Stryper "tribute" comp.
Posted by The Old Man at 7:36 AM