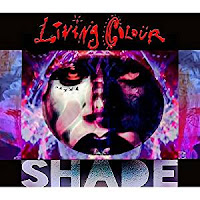 I mostly remember Living Colour from their stint in the 80's that began with the single "Cult of Personality." I loved that song. Still do. I also remember my dad watching the music video with me. He thought they were saying "culture personality" and then had to give me a lecture about why the band was a bunch of degenerates and blah, blah, blah. That was my dad for you. Anyway, recently Facebook was like, "Hey Old Man, remember Living Colour? Well... they have a new album out. And it's really good!" And lo and behold - Facebook was right on both counts. Shade really is good. It's heavier than I remember Vivid being (but that was years ago). What I like is the variety. This is one of those albums that has a lot of influences but is still very cohesive. So you'll have some blues numbers ("Preachin' Blues," "Who's That"), some funk ("Blak Out"), some hip-hop ("Who Shot Ya?" - which is a cover, I think), and some plain old rock/metal ("Pattern In Time," "Glass Teeth"). There's also a cool rock cover of "Inner City Blues." All this variety is tied together by solid instrumentation (it's mostly hard rock, venturing into metal sometimes) with good hooks. Vernon Reid is a guitar hero in every sense of the word and Corey Glover's vocals are still on point after all these years. Doug Wimbash (bass) and Will Calhoun (drums) carry the rhythm with style and finesse. This album was a delightful surprise that I wasn't expecting and worth checking out - especially if you forgot about them after "Cult of Personality."

Useless Fact: The video for "Who Shot Ya?" features photos of people who have died from gun violence from recently headliners like Trayvon Martin to people like JFK and Martin Luther King, Jr.
Posted by The Old Man at 7:47 AM