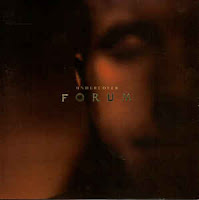 I remember getting Forum from Arrowhead Christian Bookstore. Back in the day Arrowhead (which was about an hour away from my town), was like a Mecca for music - second only to Kingdom Bound. Their selection was a lot bigger than my hometown store and so I was always excited to go there. This time however, I either had everything there or there just wasn't anything new - except Forum - which I wasn't wild about. I remember how disappointed I was at the selection that day. It was also really warm that year for fall and that made me mad too because I get mad about stupid things.

You can probably guess how this review is going to go at this point. Originally, I wasn't thrilled with this album. Except "Spill" and "The Moon and the Blue Around" which is... I don't know what style it is but I loved it then and I love it now. The rest of the album is pretty diverse with a lot of acoustic songs and some country influences. We've also got an electric version of "Symbol" from the Brow Beat compilation. So yeah... I like it a lot better now except "Whoa, Nelly" which I still don't care for but I couldn't really tell you why.

Useless Fact: I believe this was the band's last album. They came out with another one called I Rose Falling but I've heard it's not that good.
Posted by The Old Man at 9:15 AM