Galactic Cowboys - "Long Way Back To The Moon" 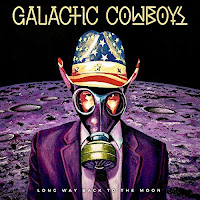 Galactic Cowboys - Long Way Back to the Moon
2017, Mascot

I was pretty excited when Galactic Cowboys said they were going to reunite with the original lineup and do a new album. It wasn't long after they announced it that the album itself was released. I am pleased to say that it's awesome. It really is... and a great way to end they year. This new releases eschews the alternative rock sounds of the band's later era to focus on a sound that would comfortably fit between Space In Your Face and Machine Fish. It has a lot of the harmonies that characterized the first two albums with a bit more of the song structure of Machine Fish. "In the Clouds" was the first song the Cowboys ever wrote and it definitely sounds like something that would have been on the debut. "Next Joke" has the sickest breakdown in the middle - one of my favorite breakdowns of all time (right up next to the one in Deliverance's cover of "After Forever"). "Zombies" has become a favorite of both my daughters (which is no mean feat with the older one!). And the title track is epic and spacey - just like you would expect and want from the band. In fact, it's amazing how much this just sounds like the Galactic Cowboys of old. They didn't reinvent their sound or anything but.... it's so good! In my review for Alice Cooper's Paranormal how it didn't break any new ground but was still so good and that's kind of the case here. Long Way Back to the Moon is kind of a "by the numbers" Cowboys album but.... it's sooooo good! Comfortable and new at the same time. Honestly, it's the kind of thing I needed after kind of a crappy year (in general, not necessarily in music). It's not lost on me that the band commented on this exact phenomenon in "Believing the Hype" a hilariously meta-tune about getting the band back together. I really hope this isn't just a one-off reunion for the guys because I could go for a couple more of these.

Useless Fact: The band signed to Mascot for this album (making them label mates with Ayeron). In an interview they said they'd rather have a label do things for them instead of having to do everything themselves with crowdfunding. Hey, in this case I can't argue with the results.
Posted by The Old Man at 9:49 AM