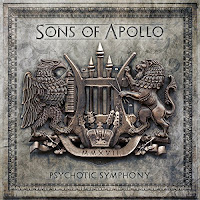 Sons of Apollo - Psychotic Symphony
2017, Inside Out

Wow... this is kind of what I've wanted from Dream Theater. While Portnoy is maybe the most recognizable name in this group (at least to me) it's filled with experienced and talented players. Jeff Scott Soto on vocals, ex-Dream Theater Derek Sherinian, Ron "Bumblefoot" Thal, and Billy Sheehan. Quite a list there. So what do I mean when I say "this is kind of what I wanted from Dream Theater?" Well with all of that progressive virtuosity on display in songs like "God of the Sun," "Labyrinth," and "Opus Maximus" (an instrumental track), there are some serious monster hooks on this thing. "Coming Home" and "Alive" come to mind - but every song has something to keep you coming back. Everyone gets a chance to shine and Jeff Scott Soto's vocals are on point. He's got such a smooth delivery but it matches the music perfectly. It's got that perfect meld of progressiveness with pop/metal hooks. I also like the nice, thick guitar tone as it just makes the album sound stinkin' heavy.
Now, to be fair, I don't know if the boys here are breaking any new ground or anything. Fans of this genre will be pretty comfortable here with little in the way of genuine surprises. However, for me, the songs are great and while it might not be too innovative, it's an absolute blast to listen to.