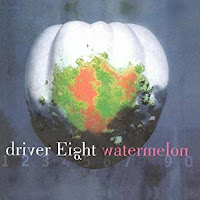 I remember listening to the demo of Driver Eight back in the day at my local Christian bookstore. I also remember really being impressed and wanting to buy it. Shortly thereafter though I got out of music entirely and Watermelon was lost to me...until now. I guess I was in the mood for some mid-nineties indie alternative rock. This album was just the thing to scratch that itch. I also like the lyrics which are Christian in nature but very subtle. Though that was the thing back then. Nevertheless, this disc is quite good and it just proves that, even as a teenager, I had pretty good taste. It's too bad this band never put out any more albums...at least I don' think they did.

Useless Fact: "Driver 8" is the name of an R.E.M. song. I'm pretty sure the band is named after this song. There's definitely some R.E.M. influence in their sound.
Posted by The Old Man at 9:17 AM