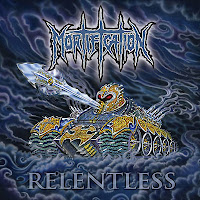 If you're looking for one of the best albums of the post-EnVision era, this is it. The jump in quality versus what I've heard so far is amazing. This is the first album with Terrorphobia's Mick Jelinic. I thought maybe he was maybe the main songwriter here. But, nope. It's actually Steve Rowe and second guitarist Jeff Lewis. Relentless is a thrash album for the most part. It's filled with tasty, infectious riffs and a lot of attitude. "Sorrow" is a doom metal track and I'm not usually one for doom metal, but this one rocks. Again, largely due to some stellar riffing and guitar work. "Apocalyptic Terror" is full on death metal - reminding me of the old B-side "Butchered Mutilation." Steve is using his clean thrash vocals, but they're not annoying. Though I do think that if he did the whole album in growls it would be better. Also, there are a couple tracks that I could do without. "Bring Release" and "Arm the Anointed" come to mind. They're not bad but the rest of the tracks are so good these bring down the vibe a little bit. Despite my minor complaints, Relentless is just as good as stuff from the early era. I wished this quality would have continued...

Also, I can't tell if the cover art is awesome or cheesy. Both, maybe? I do like it, I can tell you that.

Useless Fact: This is the only time in the band's history to have four people (two guitar players) in the line-up.
Posted by The Old Man at 7:00 AM