Panic! At The Disco - "Pray For The Wicked" 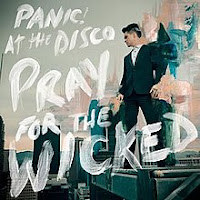 Death of a Bachelor was great. Really great. Written before Brandan Urie married his wife, that album is filled with vigor and passion. This one? Well...it definitely feels like a plateau. It's definitely not his worst album - not by a long shot. It's also not his best. Pray for the Wicked busts out of the gate with two really great tunes, but after "Say Amen (Saturday Night)" it sort of levels off. I've listened to this album several times and I still don't remember some of the songs. Not great, not crap - sort of in the middle along with Vices & Virtues. Oh, and there's a song with some trap influences on here so...ew. It doesn't stay that way but I really don't like trap music. I don't have much more to say because, unfortunately, this is just that kind of album.

Useless Fact: I don't really know any interesting factoid about this album. That's kind of par for the course for it though.
Posted by The Old Man at 6:23 PM