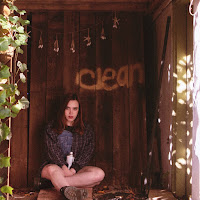 Sometimes Facebook can do good things – like when it shoved the video for Soccer Mommy’s “Cool” in my feed. Lately I’ve been craving that mid/late 90’s indie rock sound and Soccer Mommy has that covered. Bright jangly guitars, fat fuzzy bass, lithe vocals. Yep… really scratches that itch. Most of the lyrics are about pinin’ after boys. It’s not just whining, though. There’s some pretty dark and violent imagery, specifically regarding the feeling of being emotionally consumed and used. Instead of being insufferable (which is a real risk when pinin’ after boys), the lyrics convey vulnerability and melancholy. Musings on unrequited love, if you will. I’m also getting a bit of a Sundays vibe here  – especially in the vocals. I’m glad that I got in on the ground floor because the Sophie Allison (who is the driving force) shows a lot of potential for growth and I can see her going on to do some great things.