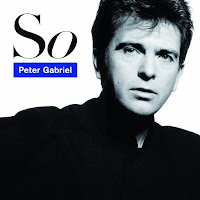 I've always been meaning to dig a little bit further into Peter Gabriel's solo stuff. I listen to Hit way too much to not have any actual albums in the vault. I started with So because, as I mentioned, I'd spend hours watching MTV when I was home sick as a child just to catch "Sledgehammer" or "Big Time." As one would expect, Peter Gabriel's pop music is artsy and compelling and wonderful. Even some of his Genesis-era weirdness shows up (like on "This is the Picture"). I've always been of the opinion that Peter Gabriel works better as a solo artist and So is the first piece of evidence I would submit. I think this was his most successful album - it's certainly his most accessible. Discussion question: I don't think I've ever heard Peter Gabriel called a "sell-out" even though he totally made commercial pop music. As opposed to Phil Collins, who gets that reputation in spades. Why is that? Granted I've never listened to Phil's solo stuff in depth. Anyway...So... it's great. Case closed.

Useless Fact: Peter Gabriel does not like album titles. The story goes that the reason he chose So as the album title is because the record company made him pick something. He thought So would look good from a visual standpoint on the album cover.
Posted by The Old Man at 8:12 AM