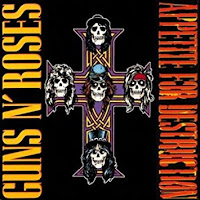 I've had to replace my old copy of this album for awhile. It was one of those cheapo five dollar Walmart deals with no liner notes or anything. I never got around to it until now. Since this is a proper reissue with a remaster, extra tracks, liner notes, I figured I'd get this definitive edition for the vault. I still maintain that Guns N' Roses was never as good as they were on Appetite For Destruction. I don't think there was anything wrong with the original master, but this remaster sounds great and really highlights how talented this band was in their prime. This edition also includes most of the material from GN'R Lies which saves me the trouble of having to bother with that. Not that I think I ever would... though "Patience" is a great song. Still trying to decide if I want to to try getting into the Use Your Illusion albums.

Useless Fact: My fellow game nerds know that the robot bosses in Mega Man X5 were named after members of Guns N' Roses (Duff McWhalen, etc). However, with the reissue of the game on the Mega Man X Legacy Collection 2, they've gone back to the original names. Weird, I thought it was kind of silly originally but now I miss them. "Tidal Whale" just isn't as cool anymore.
Posted by The Old Man at 8:40 AM