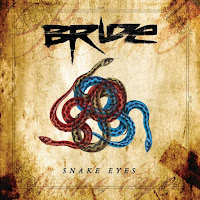 Wow... so...Bride really wants you to associate this album with Snakes in the Playground. To the point that the intro is literally a recap of that album. It was made specifically to recall that time period - something they said while they were crowdfunding the recording. They've even dug up the old Kinetic Faith logo (which I always liked). Of course, the problem with that is you're not just trying to recapture a sound. You're have to capture the feeling of an era. I remember seeing Bride at Kingdom Bound in '92 just before Playground was to come out. They put on an amazing show. They were a band at their peak and they knew it. It was electric. We eagerly anticipated that release and when it came it remained in heavy rotation throughout my youth group. Snakes in the Playground remains a classic to this day. That zeitgeist is part of the magic of that time and it's almost a fool's errand to try and recapture it. Honestly, when that opening riff to "Fake News" kicked in I thought, "Dang...maybe they've done it." But alas...

The previous paragraph probably leads you to suspect that I don't like this album. That is not the case. I really enjoy this album and I want others to enjoy it too. I just want to manage whatever expectations people may have. No, it doesn't match Playground, but it's still a dang fine hard rock album and certainly the best since their heyday. Dale can't quite do the unrestrained screams of yesteryear, but he still sounds great and there's a lot of variety in his delivery (he does do a few screams here and there). Troy's riffs are infectious and heavy. I mentioned the opening of "Fake News" and there's a lot of that old fire here. While Playground remains the primary influence, there's also a good bit of Scarecrow Messiah. More than I expected. Heck, in a couple songs ("There's Always Tomorrow" being the best example) the band reaches way back, dipping into Live to Die-era. It's fleeting but it's there. The band has said this is their final release. If it has to be the end, this is a good one to go out on. Snake Eyes might not be the sequel to Snakes in the Playground that everyone wanted, but it's a good and fitting celebration of the band's career.

Useless Fact: I guess Dale lives in New Zealand now? Anyway, I pre-ordered and got an album cover sticker signed by Dale and Troy.
Posted by The Old Man at 9:09 PM