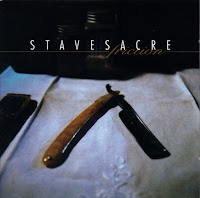 Friction represents sort of an end of an era for me. I first bought it at Kingdom Bound in 1996. Among the other CDs I bought that year were by the O.C. Supertones, Roadside Monument, PFR, and others. You'll notice that's a lot of "not metal" there. I think it was the first time I was really conscious of the fact that time was marching on and all of the metal bands I loved were gone. Some had been gone for years. Everything was changing for me - the video games I played, the shows I watched. Everything was moving away from what I always considered the "golden age." Now that I have a little perspective I realize that wasn't necessarily a bad thing, but at the time it was a little sad for me. The album itself is pretty good! I always like Mark Solomon's distinctive vocal style. And while sound is more alternative and hardcore there's some pretty great tracks on here. It's also pretty heavy despite not being "metal." Also very melodic. "At the Moment" in particular really helped me out recently. It wasn't long after this that I kind of got out of music so I never really listened to any more Stavesacre, though they were a favorite with the kids in college.

Useless Fact: The lyrics for "Devil" are under the CD tray. Why? They're not...like...offensive or anything.
Posted by The Old Man at 10:37 AM