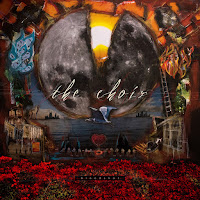 Hey, remember way back during the Loudest Sound Ever Heard era when Steve Hindalong said his wife didn't want him to write about their relationship anymore? Well...let's just say he's gone back on that a bit here. Most of the album's lyrics are inspired by Steve's recent divorce. I hate to say it, but that tragedy makes Bloodshot a pretty compelling album. The heartache is real. All of the fights, the sleepless nights, the confusion - it's all here. In "House of Blues," Derri sings, "Bittersweet reverberations/That melancholy ghost is here/Haunting every empty room/Meet me in the hallway/I'll trade you tear for tear." You can really feel the anguish in every note. It makes me look at my own marriage and appreciate what I have and maybe try to avoid some pitfalls. "The Dizzy Wounded" is another favorite with the chorus, "Before we begin our descent into madness/Why don't we/The dizzy wounded dance." There are a few breathers here, "Californians On Ice," "Magic," and "We've Got the Moon," are mercifully upbeat and provide a reprieve from the tumult and balance out the album a bit. Music-wise, the band doesn't stray too far from Shadow Weaver except with maybe a little more acoustic guitar and a little less ambient guitar swirlies. "The Way You Always Are" sounds like it could have been on Steve's solo album, The Warbler (especially because Steve sings the lead). Probably the only track that I don't care for is the album closer "The Time Has Come." It contains 90% of the albums guitar swirlies ("Because You're Beautiful" contains the other 10%). The lyrics center around the theme of forgiveness... but I don't know. It feels like the band wanted to end on a more positive note so they included this song - it falls a little flat for me. Also, as Uvulapie pointed out to me, the bass is kind of buried in the mix for some reason. It sucks sometimes that heartache and pain translate into some of the best art but it's what makes Bloodshot so engrossing. It's among the best of the band's 2010's era for sure.

Useless Fact: There are a few videos for songs on this album, "Californians on Ice," "Birds, Bewikdered," and "The Time Has Come."
Posted by The Old Man at 7:12 AM