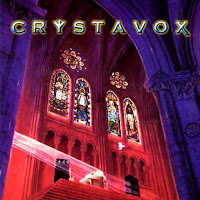 Just look at that cover art, eh? Pretty gorgeous. I saw this on tape way back in the day. I stared at it and tried to figure out if it was metal or not. The logo certainly seemed metal, but while gorgeous, the cover art led me to mistakenly think it could be some Dino-esque piano music. No, I didn't listen to the demo at the store for some reason. I definitely made a mistake that day because Crystavox's debut album is good. Surprisingly good. It's commercial 80's hard rock/heavy metal and listening to it is like going back in time... in a good way. I'm not sure why I'm surprised as to how much I ended up enjoying this. I guess because sometimes I hear these albums now and they just don't do anything for me like the might have way back when. Crystavox is full of big, catchy choruses and anthemic tracks with a lot of power and passion. The recording quality is also much better than I expected. "Sacrifice" and "Home Again" were the big "hits" off this album. At least those are the songs I saw on CCM's charts every month. If you were part of the scene and missed out the first time, you need to check this out. It's good stuff that kind of got lost in the shuffle and I'm glad Roxx reissued it.

Useless Fact: So The 20 Year Mix is sort of a "best of" that's been remastered, remixed, and rerecorded in some places. I haven't heard it but now that I have the originals I don't know if I need it.
Posted by The Old Man at 8:04 AM