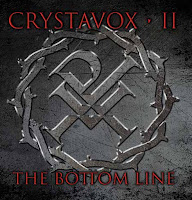 Now, this one I did not miss out on. I bought it on cassette when it originally came out. I did not really like it that much except for a track here or there. I have no idea why this is - especially listening back now. What was wrong with me? II: The Bottom Line is a bit dirtier, more raw, less commercial. Even the cover art is more low key. This was a common thing back in the day - first album was shiny, slick, and commercial, then the sophomore album was a bit more gritty (see: Ransom, The Brave, etc). This totally works for them though as I think this one is a bit better than the debut. Their look is even a bit more down-to-earth, trading in the mile-high hair and spandex for leather jackets. This is seriously an underrated album. Still kind of reeling about how wrong I was about this album when I was young.

Useless Fact: Two more tracks from the 20 Year Mix. I'm starting to think I might need this album too, just to complete the collection. Y'know... for research purposes. Yeah...that's it...
Posted by The Old Man at 6:59 AM