Tribe of Dan - "Shook Up Shook Up" 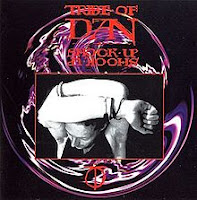 I vividly remember the mockery I received when I told my schoolmates about this album. Of course, I was the only one in my class that listened to any kind of Christian music (except for a few other friends). What's funny is I didn't really like this record except for a few tracks here and there - mostly the title track and "Barking Dog." And...well... I still don't really like it that much, so not much has changed. Though this is one of those instances where I think that this is a disc that's just not for me rather than it being bad. Definitely not bad. Indeed, the guitar work is gritty and raw as are Dan Donovan's vocals. The songs have plenty of energy. It fits into that sort of punk/alt rock/hard rock genre that wasn't really a big thing in general in 1992. I don't know... it just never did anything for me and it still doesn't. I'm putting it up here because it's definitely obscure and I don't think there's much info on it. They only released one other album, The Bootus Red, in 1998. I think maybe if this had come out a little bit later, say '94 or '95 it might have gotten some more traction. Though Blonde Vinyl was always kind of ahead of the curve in terms of genre busting music. I definitely recommend checking this out as I think a lot of people would really dig it even though it isn't for me.

Useless Fact: Who is Dan Donovan? Did he front any other bands? He sort of came out of the blue and went right back up into it. That is to say, I don't have much in the way of interesting informational nuggets.
Posted by The Old Man at 8:21 AM