Evergrey - "In Search of Truth" 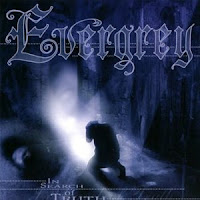 1. The Masterplan
2. Rulers of the Mind
3. Watching the Skies
4. State of Paralysis
5. The Encounter
6. Mark of the Triangle
7. Dark Waters
8. Different Worlds
9. Misled

My first exposure to Evergrey came with their "sellout" album, Monday Morning Apocalypse. If I recall I liked it but it wasn't something that completely enamored me. I've always wanted to hear some of their progressive stuff and I recently acquired several of their albums. In Search of Truth is one of the more popular ones as far as I know. It's okay. That's what's weird about it. The music is well-written and the vocalist is great, but I never really latched on for whatever reason. My other problem has nothing at all to do with the music. The concept is about alien abductions and what-not. However, the whole thing is just dark and moody (which is sort of their thing, I know) and it never really seems to resolve itself. It's just kind of a spiritual black hole - only you're sticking it in your ear. I'm going to listen to some of the other albums I have and maybe something will stick.

Useless Fact: Vocalist Tom Englund performed on Ayreon's binary album. I'm too lazy to look up the exactly 0110 combination.
Posted by The Old Man at 8:32 PM