Fueled By Fire - "Spread the Fire" 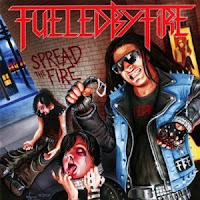 Spread the Fire was another gift from a friend. There's a sticker on the cover that says "AUTHENTIC THRASH METAL" - and they sure are. As if you couldn't tell by the thrash guy choking out the goth kids on the cover. Classy. They play a throwback sort of thrash metal, similar to Gama Bomb. Unfortunately, they don't do it with quite the style or fun of Gama Bomb. They certainly have the chops - chugging riffs, great leads, etc., but they don't have that sense of fun or nostalgia. Well, they do have some pretty muddy production like back in the old days, but that's not a good thing. It's a slog to get through and it shouldn't be, especially since I love this style. The vocals sound almost exactly like Gama Bomb too. So, in short, if you want to listen to throwback thrash - choose Gama Bomb, because they are awesome. Fueled By Fire? Um... not so much.

Useless Fact: Supposedly tracks ten and eleven are supposed to be "bonus tracks" but I don't think there's any edition of this disc lacking those tracks.