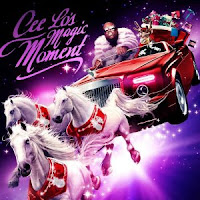 I like Cee Lo. I like that he doesn't take himself too seriously. He's like all, "Yeah, I'll wear a giant peacock costume while I play." Or, "I want a Mr. Bigglesworth-cat to stroke while I'm on The Voice." My wife likes to call him "the black Elton John." Cee Lo's Christmas album is a lot of fun too. I heard "Merry Christmas, Baby" on the radio and I really liked it (it features Rod Stewart) so I decided I'd check this out. I like "What Christmas Means to Me" and "All I Need is Love" - the latter of which features the Muppets. I also dig the acapella version of "You're a Mean One, Mr. Grinch." It's also nice to see "Mary, Did You Know?" and "River" two songs that I don't think get enough treatment. Probably the only thing I have a problem with is the duet with Christina Agulera: "Baby, It's Cold Outside." The problem isn't that it's bad, the problem is that Christina cannot just sing a line. She has to fill it with trills and fills and whatnot. Vocal acrobatics do have their place but it's not in this song. I also had to get used to some of the more R & B type songs as that's not really my style. Overall, though, it's a solid Christmas album that my entire family likes.

Useless Fact: Did you know Christian comedian/singer Mark Lowry wrote "Mary, Did You Know?" Yep he sure did. And it's been covered by a lot of secular musicians - not the least of which is Kenny Rogers, who looks a bit funny now that he's had some "work done."
Posted by The Old Man at 8:20 AM