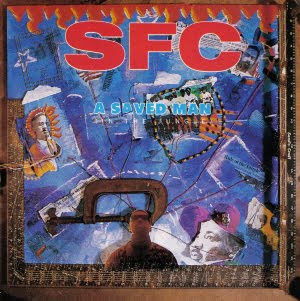 S.F.C. - A Saved Man (In the Jungle)
1990, Broken
1. Whatever
2. A Saved Man
3. Suplex 2 Mind
4. KACR 1
5. Idiot Box
6. Long Way
7. Raminos
8. Peculiar
9. The Verdict
10. In Your Speaker
11. The Bomb
12. My Alarm/Freestyle
13. Honesty
14. KACR 2
15. Can't Wait
16. Success
17. 2 Much Chemistry
18. A Word From Our Pastor
19. Jungle Message 2 Man
20. Prime Time Mix
I remember the first time I heard this album. A few of us were all sitting around when we popped this into my friends enormous boom box and when we heard the first notes of "Whatever" our jaws hit the floor. This was honest-to-goodness rap. This wasn't the poor imitation crap spewed out by a lot of Christian record labels at the time. This was the kind of stuff that was just as good as what was on MTV... I would argue better. Not to mention the elation I felt at the Guns N' Roses sample in "A Saved Man." Super C's lyrics weren't all bright and sunshiney either. He leveled his lyrical barrels at the church and called it out on its racism and hypocrisy, then turned around and did the same to non-Christians too. The beats are catchy and the rhymes are clever. Super C is another one of those rappers whose writings could be used as poetry. They can also be pretty funny as well - especially Sup's fixation on proper oral hygiene. Even the "skits" are amusing and I don't skip over them even though it's been 18 years since this came out. Wow.... has it been that long? Anyway if you don't believe me that this is a landmark album just listen to a track like "2 Much Chemistry" with the live drums, bass, and saxophone. Man, with Sup's raps over top of it - it makes me a rap believer even though I've never been a huge fan. Any of S.F.C.'s offerings is top of the line rap but A Saved Man (In the Jungle) remains my favorite to this day.
Useless Fact: On "2 Much Chemistry," which I previously mentioned Jon Knox (Adam Again) plays drums and Dan Michaels (The Choir) plays sax.
Posted by The Old Man at 8:31 AM