Seventh Angel - "The Dust of Years" 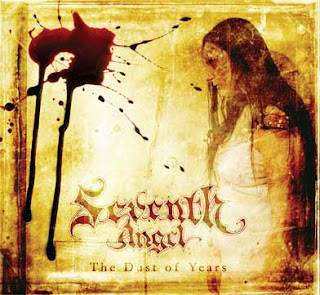 Seventh Angel - The Dust of Years
2009, Bombworks
1. Chaos of Dreams
2. The Turning Tide
3. Exordium
4. Weep Not For Us
5. Abelard and Helois
6. In Ruins
7. Lamentations
8. The Raven Sky
9. Oswiecim
Here's the problem with Seventh Angel's newest disc. If you go into it expecting the thrash you heard and loved on The Torment and Lament for the Weary you will be sorely disappointed. The Dust of Years has far more in common with Ian Arkley's other band My Silent Wake. Like chunky infectious riffs? Too bad. Like lyrics you can understand the meaning to? Too bad. Like Ian's thrash vocal style? Too bad. Yeah... now objectively this is not a bad album at all. The songs, while not necessarily full of hooks, are interesting and appropriately moody and gothic. There's hints of thrash here and there, but for the most part it's doom metal. Not a bad album, just go into it with the right expectations.
Oh... there's been a lot of fuss about the album being downloaded more than it's been bought. I can understand why someone would want to download it. The band's sound has changed and I think people really wanted to preview this one. They did, then found it wasn't the Seventh Angel they'd loved, then didn't buy it. It's sad but I don't think Believer had many problems with downloading because they still sounded like Believer. The Dust of Years sounds more like My Silent Wake than it does Seventh Angel. Oh well... I bought mine on Itunes and am planning to buy a hard copy someday. Useless Fact: According to an interview in HM Magainze, drummer Tank is now a Buddhist and the band no longer considers themselves a "Christian" band. They also inherited bassist Mark Broomhead, formerly of Detritus.
Posted by The Old Man at 8:35 AM