Metanoia - "In Darkness or In Light" 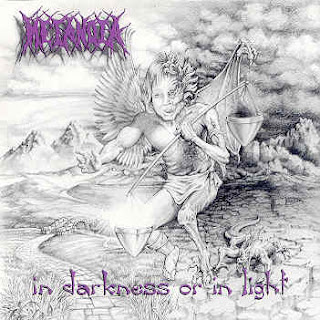 Metanoia - In Darkness or In Light
1995, Rowe Productions
1. Acute Obliteration
2. Enslavement
3. In Darkness or In Light
4. On and On
5. Dead Flesh
6. Dimensions of Life
7. Son of Man
8. Torn by Dogs
9. Death of Death
10. Seventh Seal
ROOOOOOOAAAAAR! URRRRRAAAHHHHH! Ha ha! Yeah, Metanoia is death metal with the characteristic cookie monster vocals. The good thing about these guys though is that they're not just pure speed - there's some good riffs mixed in and you can tell these guys are influenced by classic metal which makes them far more interesting than the average death metal band. I first heard these guys on a Rowe Productions sampler called Hard n' Heavy From Down Under. I was just blown away by "Acute Obliteration" and "Dimensions of Life." Though I've never been a huge death metal person so I don't really listen to this often.
Useless Fact: This band put out three official albums including this one. I don't have those though. Yeah... not much of a fact I know but I couldn't think of anything else.
Posted by The Old Man at 4:02 PM