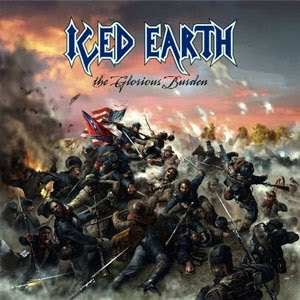 Iced Earth - The Glorious Burden
2004, SPV
Disc One:
1. The Star-Spangled Banner
2. Declaration Day
3. When the Eagle Cries
4. The Reckoning (Don't Tread On Me)
5. Greenface
6. Attila
7. Red Baron/Blue Max
8. Hollow Man
9. Valley Forge
10. Waterloo
11. When the Eagle Cries (Unplugged)
Disc Two: Gettysburg
1. The Devil To Pay
2. Hold At All Costs
3. High Water Mark
I really don't listen to much Iced Earth. I personally have a problem with some of the dark themes they revel in. It's probably guitarist Jon Schaeffer's anti-religious stance that does it, though I understand that it's leveled more at organized/institutional religion that it is actual belief. I got this disc because I heard it was about history and I thought that was pretty cool. This album is pretty cool too. Schaeffer's got the fastest wrist in all of metal I think - the speed of some of these riffs (like on "The Reckoning") are mind boggling! I just can't believe a human can pick a guitar that fast. A lot of people complain about the new vocalist Tim "Ripper" Owens (ex-Judas Priest) but I think he does a fine job. He does sound a little "Halfordy" at times but since I've never been a big fan I don't really miss Matt Barlow as much as a fan would. Some people think that "When the Eagle Cries" is cheesy... and it kind of is. Sorry. But that's not such a big deal for me though I could have done without the pansy version at the end of disc one. Finally, I think Jon Schaeffer should get some kind of award for "Gettysburg" because that is the coolest Civil War themed progressive metal song I've ever heard. Okay it's the only one, but still!
Useless Fact: I actually managed to snag the two disc version of this one! The single disc doesn't have "Waterloo" on it or the unplugged version of "Eagles."
Posted by The Old Man at 8:55 AM