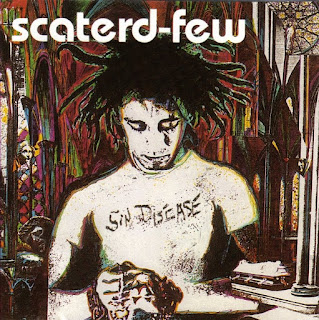 Scaterd Few - Sin Disease
1990, Alarma
1. Kill the Sarx
2. While Reprobate
3. Beggar
4. Lights Out
5. Later (L.A. 1989)
6. Groovey
7. Glass God (No Freedom in Basing)
8. As the Story Grows
9. U
10. A Freedom Cry
11. Scapegoat
12. Wonder Why
13. DITC
14. Self
15. Look Into My Side
16. Kill the Sarx II (Apocalypse)
Sin Disease is an amazing, awesome album. Even if it were released tomorrow it would still be ahead of its time. Its raw, dirty, frenetic, and dark. Completely infused with an urban vibe the album captures moments of life in the ghetto. From gang bangs to drug addictions every note delivers a painful message that's genuine and pulls no punches. There's almost an "otherworldy" quality about this disc which comes to a head in the album closer "Kill the Sarx II (Apocalypse)." It's a sprawling seven-minute track that starts off as a lounge version of "Kill the Sarx" but ends up a disconnected mess that's very off-putting. Not to mention the spine-warping bass guitar that actually takes center stage while the psycho guitar flies over everything. Then you've got Allan Aguirre's voice which sounds a little like David Bowie mixed with... I don't know... a cat being strangled. I know that doesn't sound like a good thing, but trust me, it totally works to make this one of the most interesting vocal performances I've heard on an album. Is it punk? No, it's far too progressive for that. Is it rock? No, it's far too agressive and caustic. It's not metal either, it's its own mixture of all these elements that had never before been done and hasn't been to this day.
Useless Fact: I think some of that "otherworldy" quality I was talking about was due in part to the fact that the band was toking up some fatties while making this record. For those who don't know that means they were smoking marijuanna.
Posted by The Old Man at 7:57 AM