Mad at the World - "Boomerang" 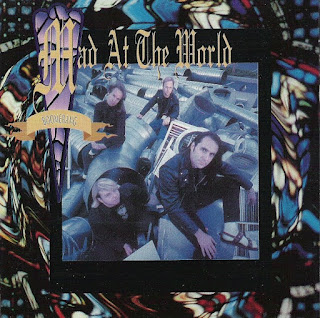 Mad at the World - Boomerang
1991, Alarma
1. House of Sin
2. If You Listen
3. Back to You
4. Don't Give Up
5. Ballad of Adam and Eve
6. Sunday
7. Draggin' the Chains
8. All These Questions
9. Isn't Sex a Wonderful Thing?
10. No More Innocence (Reprise)
Mad at the World is a wonderfully consistent band. Boomerang isn't groundbreaking or legendary but it's every bit as good as the last one, maybe a bit better. I do like the songs here as a whole better than the last as well. Randy Rose has also finally settled on his Jim Morrison/Danzig style which I've always liked. This also includes a rock version of "No More Innocence" which I think was on their debut.
Useless Fact: In a recent interview in Down the Line ezine Roger Rose questions whether or not he was clear enough on the satirical "Isn't Sex a Wonderful Thing?" He's a better man than I because if it was me I would have called my detractors idiots who would find themselves far more enlightened about the song if they would simply open their eyes and carefully read the lyrics. But like I said, Roger's a better man than me.
Posted by The Old Man at 8:52 AM

Labels: Mad at the World