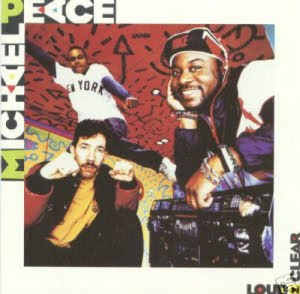 Peace, Michael - Loud N Clear
1990, Reunion
1. Ad Lib
2. Rrrrock It Right (Let's Get Busy)
3. J-E-S-U-S
4. Vigilante of the Rhyme
5. I'll See You There
6. Solid Rock
7. That's Right
8. He's the Baddest
9. Livin' On the Edge
10. (The New) Solid Rock Crew
11. On the Throne
12. Rock Your World
I've seen Michael Peace several times live and he never failed to put on a good show. My own mother organized two Michael Peace concerts in our hometown in upstate, NY. He was always a cool guy. I always liked this live album. The crowd is rowdy but doesn't step over the music. At times Peace's rapping style can be a little simplistic but for the most part he can write a cool rhyme. He likes to name drop too and just about everybody who was anybody at the time got name dropped in this record. "He's the Baddest" has a cool saxophone section and Michael gets the crowd to sing the chorus on "I'll See You There."
Useless Fact: Michael Peace has several albums out on tape but I think this is the first one that was released on CD. Some record company really needs to get on that stuff and reissue it. Also, in one of the songs where Peace is asking people to answer "Yes! I do!" you can hear one little girl in the audience say, "No! I don't!"
Posted by The Old Man at 4:23 PM