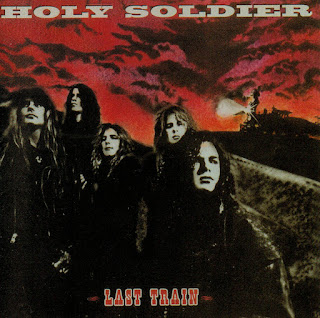 For some reason I never cared for this band's debut. I have absolutely no reason as to why, I just didn't. Last Train on the other hand is really good. I think the production is a bit less metallic... more earthy if that makes any sense at all, and I think the songs are better. Stephen Patrick's voice is unique - you can just hear the emotion he puts into his performances. My copy is the recently released Roxx Productions edition. Unfortunately, as is the case with many Roxx reissues, there are no liner notes or lyrics. So... someday I'll still have to find an old Myrrh records copy.

Here's a funny story: My cousin and I went to see these guys with some friends (the same place I saw Seraiah, actually) and their set was... in a word... hilarious. Vocalist Stephen Patrick sauntered and pranced around the stage all limp-wristed (literally!). Picture Captain Jack Sparrow singing Christian rock songs. Yeah... his mannerisms were so weird that my mother and aunt had to excuse themselves from the auditorium specifically so they could laugh until they cried. Their drummer was awesome though. He did this amazing solo where he was using those giant red plastic baseball bats to beat on the toms and his gong. That was definitely the best part of that show.

Useless Fact: The band took some guff for covering the Stones "Gimmie Shelter." "Fairweather Friend" is about the band being misquoted in a magazine. After this disc, Stephen Patrick left Holy Soldier so the band replaced him and released Promise Man.
Posted by The Old Man at 7:46 PM