King's X - "Out of the Silent Planet" 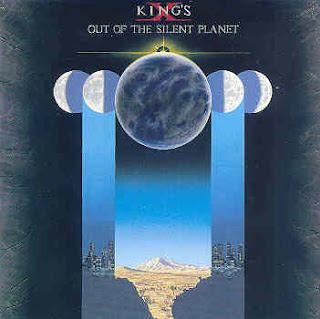 King's X - Out of the Silent Planet
1988, Megaforce
1. In the New Age
2. Goldilox
3. Power of Love
4. Wonder
5. Sometimes
6. King
7. What is This?
8. Far, Far Away
9. Shot of Love
10. Visions
How these guys never got popular I'll never know. This debut is an amazing piece of hard rock and metal. Taking equally from the Beatles and Metallica, King's X creates a sound that is full of harmonies and cool metal riffs. There's nothing like them out on the market today and there never will be. If I was teaching a class in rock music I'd hold up any King's X CD and go, "Here. This is how you do music." This disc isn't quite as progressive as the later releases but there are songs on here that I listen to them and my jaw just drops. The only knock against this album is the drawn out intro... could have done without that.
Useless Fact: Even though this album is called Out of the Silent Planet their song of the same name appears on their next album. Also, while the title is from the C.S. Lewis book of the same name, none of the songs here have anything to do with Lewis' Space Trilogy.
Posted by The Old Man at 9:31 AM