Lust Control - "We Are Not Ashamed" 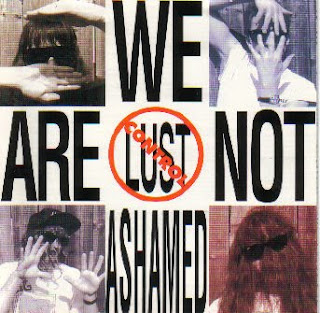 Lust Control - We Are Not Ashamed
1992, Enclave
1. Grace
2. Leave Amy Alone
3. You Make Me Puke
4. Return To Vomit
5. Planned Parenthood
6. The Big "M"
7. Deliverance
8. If You Fail
9. Virginity Disease
10. The Secret
11. Real Men Cry
12. Pray For the City
13. Mad at the Girls
14. Speaking in Tongues
15. Get Married
16. Operation Rescue
17. Victim of a Revolution/Grace Reprise
What's that old saying about polishing a turd? Lust Control's second studio album is a lot more polished in the production area than Fun, Fun Feeling but the amateur musicianship remains. As I said with the last one, you either love them or you don't. "The Big 'M'" is a song about masturbation and is hilarious. They're probably the only band in Christian music that made a song about that topic! I remember when I first got this I was at Kingdom Bound and played this disc for my pastor. He was a pretty cool guy, but I think he was still put off a little. Who wouldn't be? Lust Control said whatever the felt they had to. I always respected them for that. Anyway, Lust Control is Lust Control... you just have to take them or leave them.
Useless Fact: I'm pretty sure this album was reissued by Retroactive (the best record company ever!) with some other demo stuff. They also made a small EP after this one called Feminazi which I've only recently heard about. The rumor mill says was a lot heavier stuff.
Posted by The Old Man at 9:06 AM