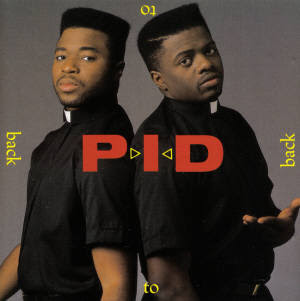 P.I.D. - Back to Back
1989, Graceland
1. Back
2. Bible Stories
3. Current Affair
4. Get Into It
5. Flys
6. Vince's Jam
7. Exclusive
8. B Movement (Movement of the Body)
9. Slide
10. Racism
11. Word From the Body
I got this online for $1.50, and you know what? That's about how much entertainment I got out of it. I had this when I was younger on tape and I don't think I ever listened to the second side. To this day I still think this disc pretty much fizzles out after "Vince's Jam." Those first few tracks are pretty solid rap though and "Current Affair" was mildly successful because it was a no holds barred, frank endorsement of abstinence (Quick rant: abstinence is NOT unrealistic!). These guys made several more albums and even changed their name to "Preachas" but I never got into them. I heard one of the guys became a Muslim at one point.
Useless Fact: Okay, I get it P.I.D. stands for "Preachers in Disguise." You know what it also stands for? "Pelvic Inflammatory Disease" which is sexually transmitted. Also, I'm glad they put that note in the title for "B Movement" because I would have though that meant something else!
Posted by The Old Man at 10:31 AM