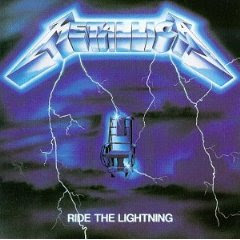 Metallica - Ride the Lightning
1984, Elektra
1. Fight Fire With Fire
2. Ride the Lightning
3. For Whom the Bell Tolls
4. Fade To Black
5. Trapped Under Ice
6. Escape
7. Creeping Death
8. Call of Ktulu
Metallica (along with Megadeth, Slayer, and Anthrax) pretty much invented thrash in the 80's. Just about every metal band out today owes a debt of gratitude to those four bands. Ride the Lightning shows a lot of improvement over the debut mainly because they've really embraced the whole "writing riffs" thing. Whereas in Kill 'Em All is seemed like the speed part was definitely more punk it doesn't feel like that here. It just feels like metal! "For Whom the Bell Tolls" and "Creeping Death" remain fan favorites to this day. "Escape" sounds almost like it's a little out of place being more melodic and having James Hetfield try to actually "sing" a chorus that's not acoustic. It's hard to believe that there was music with this kind of intensity being made in 1984.
Useless Fact: This is the last Metallica album to have Dave Mustaine listed with writing credits.
Posted by The Old Man at 8:10 AM