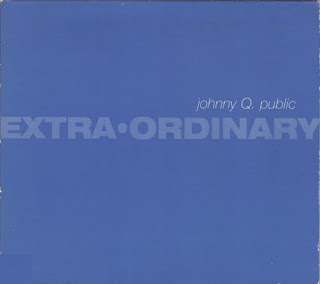 Johnny Q. Public - Extra Ordinary
1995, Gotee
1. Preacher's Kid
2. Body Be
3. Black Ice
4. As I Pray
5. Know
6. Women of Zion
7. Reader's Digest
8. Secret Trees
9. Violet
10. Big Top
11. Why
12. Scream
13. Serve Somebody
In the pulsating sea of sucky Christian alternative rock bands that were coming out in the mid-to-late 90's, Johnny Q. Public was a little bright spot. They weren't anything fantastic or unique, but they played decent catchy songs with a good hook and seemed to have something more interesting to say than the depressing nonsense that most alt-rock bands were fond of (even the Christian ones). In fact, songs like "Women of Zion" showed that the band could say something important but have fun while doing it. I find myself singing the chorus occasionally - "Bald women/ You should have been humble/ Bald women/ You should have been smarter..." I saw them at Kingdom Bound a few times and they put on a good show. If you find this for somewhere cheap, go ahead and pick it up. It's worth a listen or two.
Useless Fact: "Reader's Digest" is a Larry Norman cover and "Serve Somebody" is a Bob Dylan cover. I think this band put out one more album before this kind of music was drown out by emo, screamo, and hard core.
Posted by The Old Man at 9:16 AM